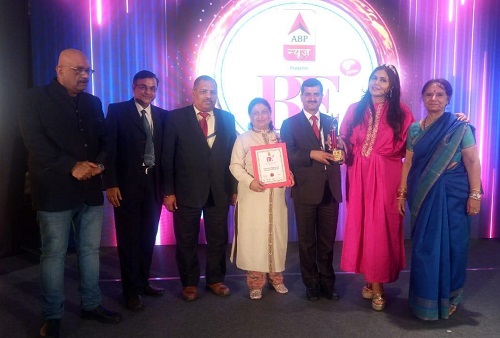 ABP News Brand Excellence Award presented IIRD with the ‘Agency Innovation of the Year’ award for its role in ushering a constructive change for holistic prosperity in multiple levels and a myriad of sectors of society. In addition to it, ABP News Brand Excellence also gave ‘Best Print Media in Development Sector’ award to THE RIEV TIMES, IIRD's fortnightly newspaper, for its efforts towards propagating our message and work towards the agrarian community through generating awareness on numerous issues and propagating information on the available Government schemes and services for the farmers.
The award ceremony took place on November 21 at Hotel Taj Land Ends in Mumbai and was attended by Dr L.C. Sharma (MD - IIRD), Mrs Sushma Sharma (Director), Mr Anand Nair (CEO – Flyers Group), and Mr Ravikant Wawge (Director).
IIRD has been impacting the developmental sector through various projects and activities that it partakes in and THE RIEV TIMES is working to propagate awareness and fill crevices of ignorance for the holistic development of villages. Launched in July 2018 is 16-page newspaper reaches the masses even in the most remote regions and is distributed to Government offices, Gram Panchayats, educational institutions, and numerous community-based organisations. From national and international events, THE RIEV TIMES focuses on sharing Government schemes aimed at Agriculture and Horticulture sectors. People also get a separate section on GK bank, health, IIRD’s activities towards rural development, and much more. THE RIEV TIMES is a comprehensive newspaper which is a harbinger of development, through which hundreds of people have been positively influenced.