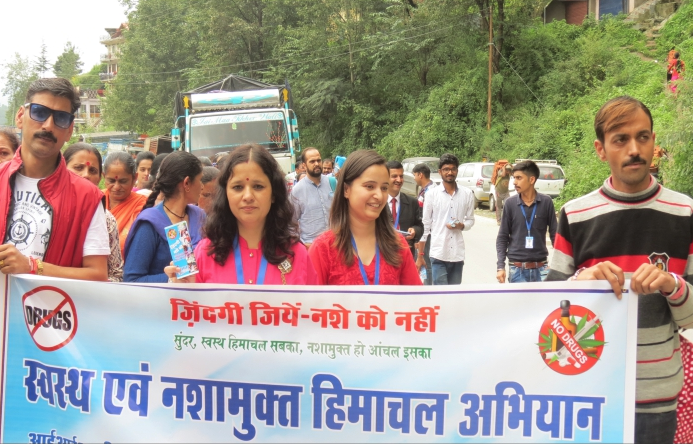 image "ज़िन्दगी जियें.. नशे को नहीं" which translates to “Live Life... Not Intoxicants”, was an anti-drug campaign launched by IIRD through Mission RIEV on September 5, 2019, to create awareness against drug use and dissuade children from getting into this life-devastating effects. The campaign successfully touched upon the lives of countless people across all the 12 districts of Himachal Pradesh and the mass awareness campaign was promoted using a number of platforms encompassing Social Media, Print Media, Electronic Media and principally of all, Community Participation. The principal goal of this campaign was to make children, adolescents and adults of impressionable age to understand the ill-effects of drug use and how all these things, though may seem enticing, can only destroy lives.
IIRD fervently propagated the anti-drug campaign through the length and breadth of Himachal. Several competitions for schoolchildren were organised to give them the opportunity to learn. The local communities and organisations also became active participants in this campaign and worked with us to ensure their children could be protected from the clutches of this demon. IIRD's websites, social media platforms, and other channels relentlessly shared this message and the staff themselves went to various places to further this cause. The campaign's Phase-I, which culminated on October 2, 2018, was a massive success where the honourable Education Minister of HP, Mr Suresh Bhardwaj, visited IIRD's HQ in Shimla and appreciated us for shouldering this mission and bringing it to fruition. That same day, i.e. on October 2, IIRD launched Phase-II of "ज़िन्दगी जियें... नशे को नहीं" with the aim to carry this campaign forward and achieve 100% success in rooting out this menace completely.